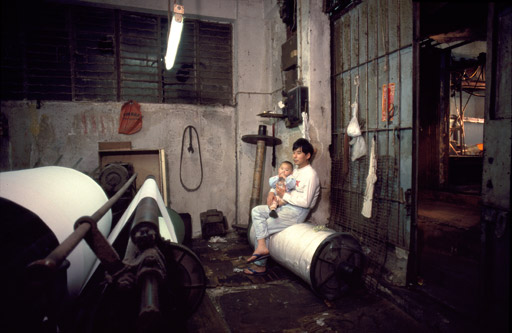 One of 12 children, Lau Yeung Yin took over the family weaving business from his father in 1982, running the company from a small factory on Sai Shing (West City) Road.

“I was born in the Walled City. My father arrived in Hong Kong the day before peace was declared. He settled in the City and began to run a weaving factory, just as he had before in his home village and in Canton.

The Walled City was a better place when I was a kid. There were just two- or three-storey stone and wooden houses then. Dad’s factory was on Lung Chung Road. I think he just squatted and occupied the space. I have 11 brothers and sisters, but we were not all living together. One sister was left in the home village on the mainland, another sister was given away and an elder brother was married before I came along. We lived in the factory. There were no beds; we just moved the yarn and cleared a space when we wanted to sleep.

We used water from the wells at the beginning and then we were served by taps outside the City. Instead of coming straight home after school we sneaked out to play, but if I came home too late Mum would beat me. We went up into the hills, sometimes as far as Lion Rock, and played hide-and-seek. One of our great joys was to have a little money to buy sweet potatoes and have them baked.

When I was very young, I was unaware of the existence of anything bad. It was only when I was 14 or15 years old that I started to be aware of the gambling dens and the drug addicts. It was quite a sight to see a line of heroin addicts squatting along the alley taking their drugs. People who came from outside to take part in such goings on would not bother the local residents.

In the early 1960s, the Government tried to demolish the Walled City and a big fight ensued. Dad was the treasurer of the Kai Fong Association then. Three days before the demolition was due to take place, they sent a telegram to Beijing and the Chinese Government responded by demanding compensation and resettlement on the residents’ behalf. Dad was fairly neutral in his politics – the Kai Fong also sent telegrams to Taiwan and it was just a matter of who cared the most.

I became a tailor’s apprentice, but only for a few months when I left school. Then I went to work in a rattan shop for my brother-in-law on Hong Kong island, and lived and worked there for several years until I was 19. Following that, I went to work at Dad’s weaving factory until I was married, at the age of 21, and then went back to the rattan shop. A while later, I was asked to return to help in Dad’s factory – my younger brother had taken it over by then. Dad trusted him, but he was just taking money from the till as he saw fit. We were making fabric for gloves and I was paid $1500 a month.

I have a son and a daughter who are studying in Wong Tai Sin. We have a public housing unit in Tai Po and we go there sometimes. We rarely sleep there though, as it is too much of a rush in the morning to get the kids to school on time.

I’ll be paid about $103,000 in compensation for this factory. I tried to get $200,000 but there was an interview – not a very satisfactory one – where I was told to reduce the sum I was demanding. I don’t think I will be able to find a similar place to continue the weaving business – I can only afford $1500 a month in rent. The machines will be sold but no one will pay a high price for them. Maybe I’ll change to another business.” 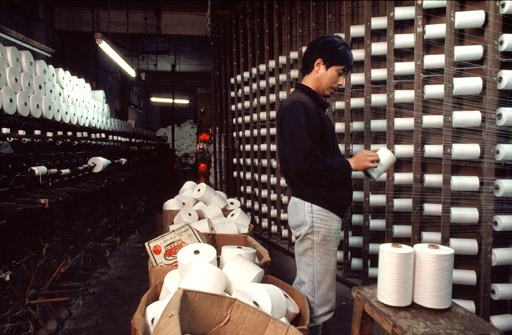