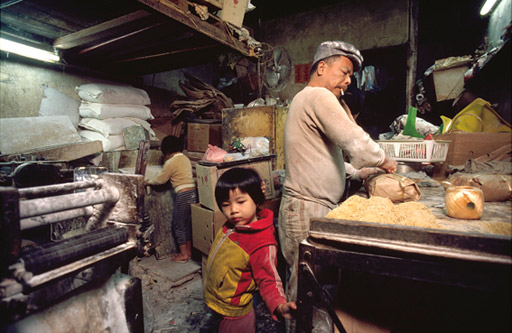 Hui Tung Choy opened his noodle factory at the back of 2 Kwong Ming Street in 1965. In 1992, he was married with two young daughters.

“I came to live with my aunt in Hong Kong in 1947; I was 16 and my parents had died. I was brought up in Sun Hui [Guangdong] and I’d only ever been to primary school. After I arrived, I didn’t do much of anything for a while, until I began working with my cousin making noodles. I then opened my own noodle-making place with a friend. We needed a little capital to buy the machines, but flour was supplied to us on credit. One person can make about five or six packs of noodles a day, which is around 300 individual ‘discs’. It’s crowded here and tough work. 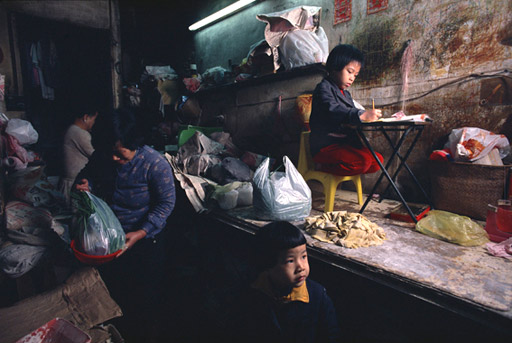 We used to employ five people when the business was at its height in 1980; we were producing around 1000 discs a day then. We also employed two young lads to deliver to customers: one in the morning, the other in the afternoon. But young people today don’t want to work in a place like this. My partner fell sick and he and his wife decided he should drop out, so now I work on my own. I’m just about able to scrape by. We chose the Walled City because rents were low and you didn’t need a licence To set up outside you’d have to go through various Government departments – labour health, fire services and so forth. The City was Chinese territory so no one took much notice of what was going on here.

I’ve been around the City for the past 25 years. Actually, we used to live in Sai Tau village [the adjoining ‘squatter’ settlement pulled down in 1985]. When we first moved here the rent was a little over $100 a month; now it’s about $1300. This building used to be a three-storey block before it was rebuilt, when we moved next door for eight or nine months. We have a flat up above but we cook and take our showers here, and my kids do their homework here too. All the people around here know us and there hasn’t really been any trouble over the years. The only problem now is that, as more people have moved away, there are more rats and cockroaches everywhere.” 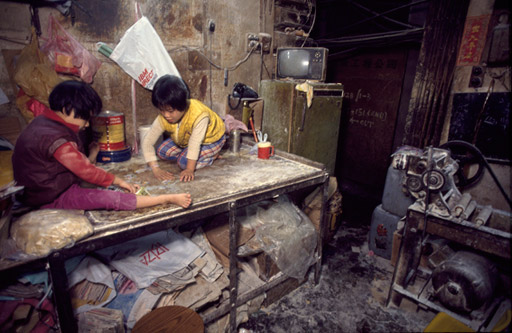