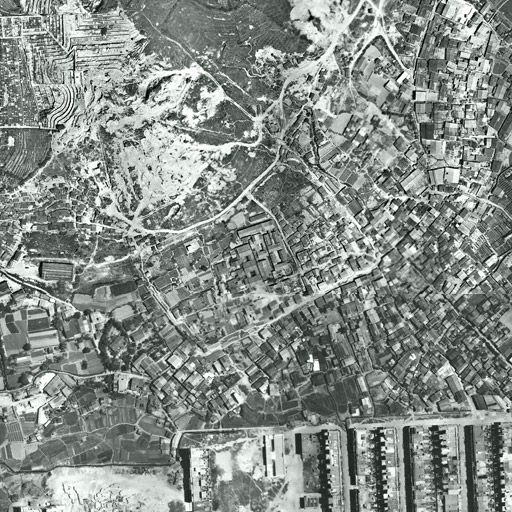 For anyone who has spent any time in Hong Kong, or indeed in South-east Asia in general, the rate of growth and change in this part of the world is readily understood, but even so it comes as a surprise when looking at the aerial photograph of the Walled City above, taken in April 1949, to realise just how little was there at that time. Interestingly, even though the Japanese had demolished the walls during the War, the outline of where they once stood is still clearly visible, as are the central yamen buildings and the original school buildings to their left, though the latter would soon be torn down with their constituent parts used to build huts and smaller buildings more suitable to the needs of the refugees flooding into the area.

And flooding in they certainly were. The numbers are revealing. By the end of 1947 it is generally assumed that the population of Hong Kong, which had fallen to around 500,000 by the end of the War, had risen back to its pre-war level of just under one million, a mixture of returning residents and early refugees from the civil war in China. With so many buildings demolished or severely damaged during the conflict, however, there was even then a drastic shortage of habitable properties and significant numbers of squatter settlements were already beginning to spring up all over the hinterland of the Kowloon peninsula and on the hillsides of Hong Kong island.

But this was just the start. With the fighting in China increasing through 1948 and into the early part of 1949, as Mao Tse Tung completed his long march towards Beijing and power, a further one million refugees streamed across the border into Hong Kong, more than doubling the city’s population in just two years. And it didn’t stop there, with another million arriving during the 1950s. In the general austerity of the time, Hong Kong could barely cope, the only sensible solution being to allow the squatter settlements to grow at an inexorable rate throughout the 1950s and well into the 1960s. 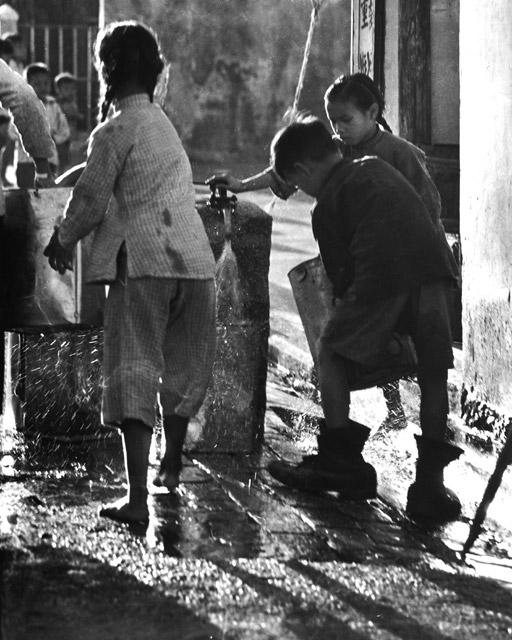 It is interesting to note in the 1949 aerial photograph that work was already well advanced on building the new Kowloon City around the grid of streets to the south of the Walled City, but elsewhere squatters’ shacks and buildings are already proliferating, though still interspersed with numerous fields and other open areas, even within the area of the Walled City itself. Sadly, no photographs of the Walled City seem to exist from this period. A photograph of a well, captioned as taken in or around Kowloon City in 1950 by the talented self-taught photographer Mak Fung, and another by him of children at a standpipe give a flavour of what life was like for those living in the squatter settlements of the time.

But the fields and open areas as shown in Mak Fung’s photographs were not to last long and, as shown in the 1956 aerial photograph below, the area was soon almost totally built up, a mixture of new developments and newly introduced public housing estates, and the growing number of self-built buildings within the Walled City itself and in the surrounding Sai Tau Tsuen squatter settlement. At this stage there was little difference between the buildings within the Walled City and the squatter settlement, most rising to just two, three or occasionally four storeys, though as the 1961 photograph of Sai Tau Tsuen shows (where a strict height limit was enforced) most, even at this stage, were substantial buildings with solid brick and concrete walls and tiled roofs.

But within the Walled City, this was about to change – the period of real growth was just about to begin. 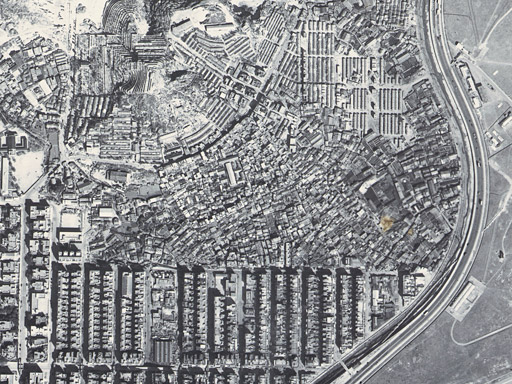 An aerial view of the Walled City and surrounding area in 1956, just six years on from the photograph above but already heavily developed. 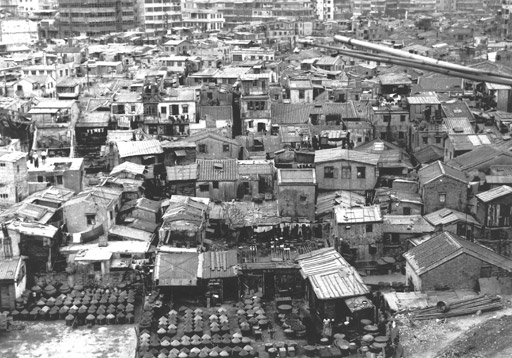 The Sai Tau Tsuen squatter settlement in 1961, like the Walled City crammed tight with substantial buildings.