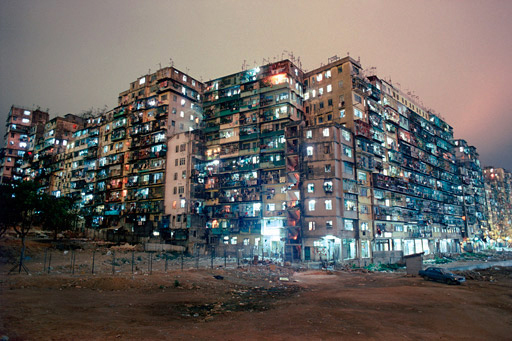 I first visited Hong Kong in 1974. I heard stories about the Kowloon Walled City on that visit but it wasn’t until I moved to Hong Kong years later that I saw the Walled City for myself. I came across it one night in 1986 when photographing near Hong Kong’s old international airport, Kai Tak. At that time the Walled City was partially surrounded by a two-story squatter village, and to enter the City you had to make your way past the hostile stares of village residents. At night the massive 12- and 14-storey facade glowed from the interior lighting of hundreds of apartments, and hummed to the sound of air conditioners and fans and television sets tuned to evening programmes.

Once inside the first thing you noticed was the tangled overhead electrical wiring and plastic water tubing, and the narrowness of the ‘streets’ – alleys formed in the spaces between buildings. Nothing I had heard about the place was any help to process the information my eyes, ears and nose were delivering. In modern Hong Kong this place was something from a parallel universe. I wasn’t able to make any photographs on that first visit, but soon returned and started trying to make sense of the place, gradually gaining the trust, or at least the indifference, of residents.

I was introduced to Ian during this time, intrigued to learn that someone else was interested in photographing the Walled City. And we ended up collaborating on the book City of Darkness: Life in Kowloon Walled City. In retrospect it seems astonishing that the Walled City didn’t attract more attention – from photographers, film-makers, architects – while it was still standing. And in our new book, City of Darkness Revisited, we go to some length to register the attention it has received and the influence it has generated since its demolition in 1993.

I am sometimes asked whether I think the Walled City should have been preserved. Years ago I usually said that it would have been impossible – preserving it would probably change it into something else or, if kept as it was, it would be unfair to expect people to tolerate those grim conditions. Recently though I’ve started to wonder where a conversation about it all might lead.